Meet the “Hero Next Door” 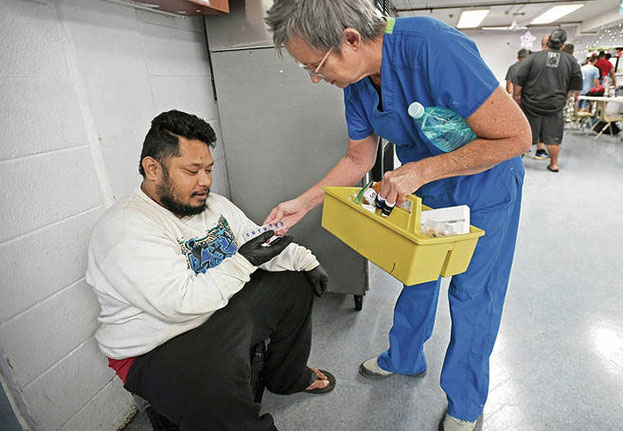 This story by reporter Dan Nakaso ran in The Honolulu Star-Advertiser in December 2019. You can read it here too.

December 2019 – Registered nurse Elizabeth Glenn starts her sometimes 10-hour workdays at 6:30 a.m. by dispensing medications to the clients at the Institute for Human Services’ men’s shelter on Sumner Street in Iwilei.

An hour or so later, she then opens the Sumner Health Services medical clinic at the men’s shelter, where Glenn operates out of a windowless closet of an office that doubles as a dispensary and catch-all storage area.

Her computer monitor sits on three packages of printer paper, next to a garbage can containing empty boxes of Invega medications that Glenn injects to help homeless clients stabilize their mental illnesses, along with medications for head lice and other conditions.

A white board in her office labeled “Wish List” includes everyday items as basic as bandage scissors, socks, nail clippers and slippers.

A quote from Mother Teresa hanging on a storage cabinet reads, “Do not think that love in order to be genuine, has to be extraordinary. What we need is to love without getting tired.”

“I’m a Christian,” she said. “I believe that we’re called to love our neighbors and help those who can’t help themselves.”

Glenn was diagnosed with Stage 3 breast cancer in May 2017 and is now cancer-free after multiple surgeries as she prepares for reconstructive surgery. Two fingers on her left hand remain bandaged after she fell off her bike, requiring finger surgery.

At the age of 62, Glenn can’t imagine retiring — or doing anything else but treating Oahu’s homeless for their medical issues.

“I’m getting old,” Glenn said in her office in between constant interruptions. “But I would be bored seriously, probably depressed. So there’s no immediate plans to retire.”

“Elizabeth is an amazing nurse who pours out her heart as she brings healthcare and healing to an unending stream of hurting homeless persons that pass through our (IHS) doors,” Mitchell wrote in an email to the Star-Advertiser. “If anyone was called to this work, it’s Elizabeth. She literally washed their feet and binds their wounds. She never gives up on her patients and goes the extra mile to ensure they get the care they need.”

The warm feelings toward Glenn are shared among the IHS clients she treats five days a week, along with other homeless people — both men and women — who wander into the men’s shelter every day seeking treatment for their diabetes, heart disease, mental illness, open and infected wounds and a host of other issues that only get worse on the street.

When she’s not working, Glenn remains on call 24/7 for emergencies.

Asked why, Sanjuan said, “Because she takes care of us.”

Bruce Bernaldez, a 65-year-old Marine Corps Vietnam veteran, received two insulin injections from Glenn last week at the men’s shelter before the sun came up. He suffers from heart disease, diabetes and osteoporosis.

After dispensing the medications that Glenn had organized in advance for about 15 clients — she quickly lost count — Glenn then hustled outside with a plastic tray filled with more pills and injections looking for any of her other regular patients.

She passed a man walking into the shelter for breakfast who yelled out to no one in particular, “Someone should do something about that 70-year-old woman laying down,” prompting Glenn to do a quick search around the shelter.

Glenn is used to treating obstinate patients with delusions — and she can be blunt.

“A lot of these guys can be really annoying and demanding,” she said. “But almost all of them need something and are not able to get it on their own. Most people go into nursing because they want to help. In this job you’re actually helping people. It’s a combination of nursing and social work that is very, very rewarding.”

One client Glenn treated every day named Kenneth weighed 70 pounds, suffered from mental illness and one day four years ago announced that he needed to get his birth certificate so he could get a government-issued ID in order to get a job.

“I could sort through all of the garbage and knew he was never going to get a job,” Glenn said. “He was crazy.”

But Kenneth told Glenn that his mother in Baltimore had his original birth certificate, so Glenn made a call.

Kenneth’s uncle answered and said, “Kenny!” Then Kenneth’s mother got on the phone and promised to send his birth certificate, which she did.

“They were all crying, Kenneth was crying,” Glenn said. “This is a mother who really loved her son. It was nice.”

The family had lost track of Kenneth in New Orleans and had no idea he was in Honolulu.

Mother, son and uncle never reunited in person, although they did talk on the phone some more. Later, Kenneth was found dead next to a bus stop on Iwilei Road near IHS, and Glenn had to call his mother with the news that her son had died on the street, homeless.

“It happens,” Glenn said about the homeless patients she treats every day. “One guy died on my porch out here one night. They fall in the river. They occasionally die in the shelter.”

Asked how the deaths affect her, Glenn said, “Most of the time I just push on.”

For about a year until recently, Glenn was the only nurse in the clinic, which saw 624 patients between December 2018 and November.

Many of the patients show up every day, so the total number of annual, overall contacts is exponentially higher, Glenn said.

The Sumner Health Serv­ices clinic at IHS’ men’s shelter is jointly run by IHS and the Hawaii Homeless Healthcare Hui, also known as H4, which operates Chinatown’s homeless Joint Outreach Center, and provides doctors to the IHS clinic. Glenn has since been joined by a recent nursing graduate.

As a University of Hawaii nursing school student, Glenn dreamed of traveling the world to help refugee and low-income populations.

Then in 1989 she took a UH class in community health nursing that changed the course of her career and led her to help Kalihi-Palama Health Center start IHS’ “health care for the homeless project.”

“It was just me and a doctor and a half-time nun, who was a nurse,” Glenn said. “When I first came here, this place was run by the homeless people. It was crazy. The homeless problem wasn’t as bad then, but it was still pretty bad, especially in this area. But I just loved working with the homeless.”

After she returned to Oahu in 2012, Glenn hated her new job working for an insurance company, buried under paperwork.

Then on a hike she bumped into Mitchell, whom she did not know but knew that Mitchell had taken over IHS. Glenn told Mitchell about her early experience helping to start the old IHS clinic, and Mitchell called her in May 2013 to offer her old job back.

Now Glenn is torn between staying at IHS or moving to the city’s new four-story Puna Wai Rest Stop homeless center around the corner from IHS that’s still being built out.

Glenn initially considered becoming the Rest Stop’s clinical director, which would take her further away from hands-on patient care.

“That’s not my thing,” Glenn said.

But she knows there will be plenty of need when the Puna Wai Rest Stop fully opens.

“I am going to move, but I also need to be here,” Glenn said in her office. “How that’s going to work? We still don’t know.”

What Glenn does know is that she wants to continue treating homeless patients for as long as she can.