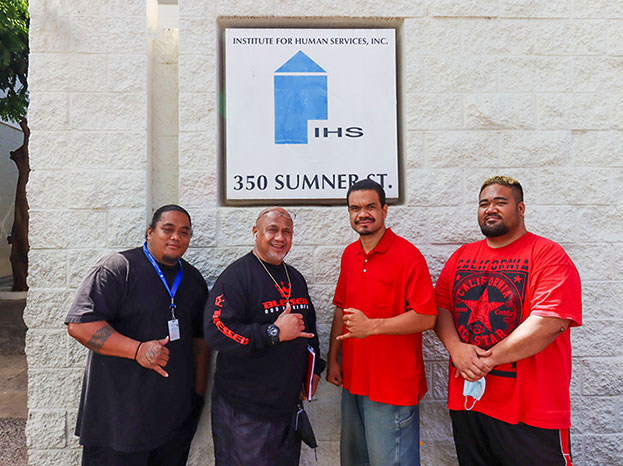 Tana Alualu, case manager for IHS’s community re-entry program, knows exactly what just-released prisoners face as they take those first steps back into the community. “They can go back to what they were doing or they can come here,” he says. “Some people aren’t ready to make changes. Sometimes it takes a long time to come to our senses.”

Alualu knows because he’s been there — seven and half years behind bars before being released and deciding which road to take. Alualu lost his first job right out of prison, after they learned of his parole. He took a deep breath and went to IHS. Alualu worked at IHS before he got in trouble, but he wondered if that door would be open to him. “But Connie [Mitchell] gave me a chance,” he says. That’s what IHS does —gives people a second chance.

Almost 15 years later, Tana is doing for recently released men and women what was done for him. He remembers not knowing how to type or use a computer or how to handle paperwork and office responsibilities. The IHS training programs taught him those skills, and now he’s working with each client, helping them gain job skills, get their benefits like housing assistance and SNAP, get an ID (which is essential for every aspect of re-entry), get a bus pass, access clothes for interviews, and practice for interviews to gain confidence.

“We meet them where they are and then guide them to find their way,” Alualu says. IHS is one of several resources that prisoners are told about during their pre-release counseling, but even still, it takes a leap of faith for them to walk through the doors. That’s when the network of organizations leans on each other, folks like Bob Bowles at United Self Help calling Alualu to find out if he can accommodate a new release. Alualu, in turn, places similar calls to other nonprofits when substance abuse counseling, anger management, or other mental health needs require special resources. “We can all help people,” Alualu says. “It’s our kuleana.”

In 2019, IHS opened the doors to House of Redemption, a home dedicated to those recently released and looking to get their lives on track. It is one of three homes operated by IHS for recently released prisoners looking to rebuild. “They’ve seen other housing options,” Alualu says of their clientele, “and often they’re skeptical.” Alualu listens and then suggests they go take a look, just to be sure. “Once they see it— this big, peaceful house with clean bedrooms and bathrooms, a stocked kitchen, a living room with couches and a big TV—they want to move in that day,” he says laughing.

He knows what a difference that house makes. “Next time I see them, once they’re living there, they’re wearing clean clothes, their things are organized and neat, they’re well groomed, and they’re happy. They’ve got a renewed sense of dignity, and now they can make plans. They can focus on their work.”

Alualu recalls his long years in prison, imagining what he might do to help people like him once he got out. Now he’s doing exactly that, fulfilling his dream and making dreams possible for others.