Creating a Road to Success 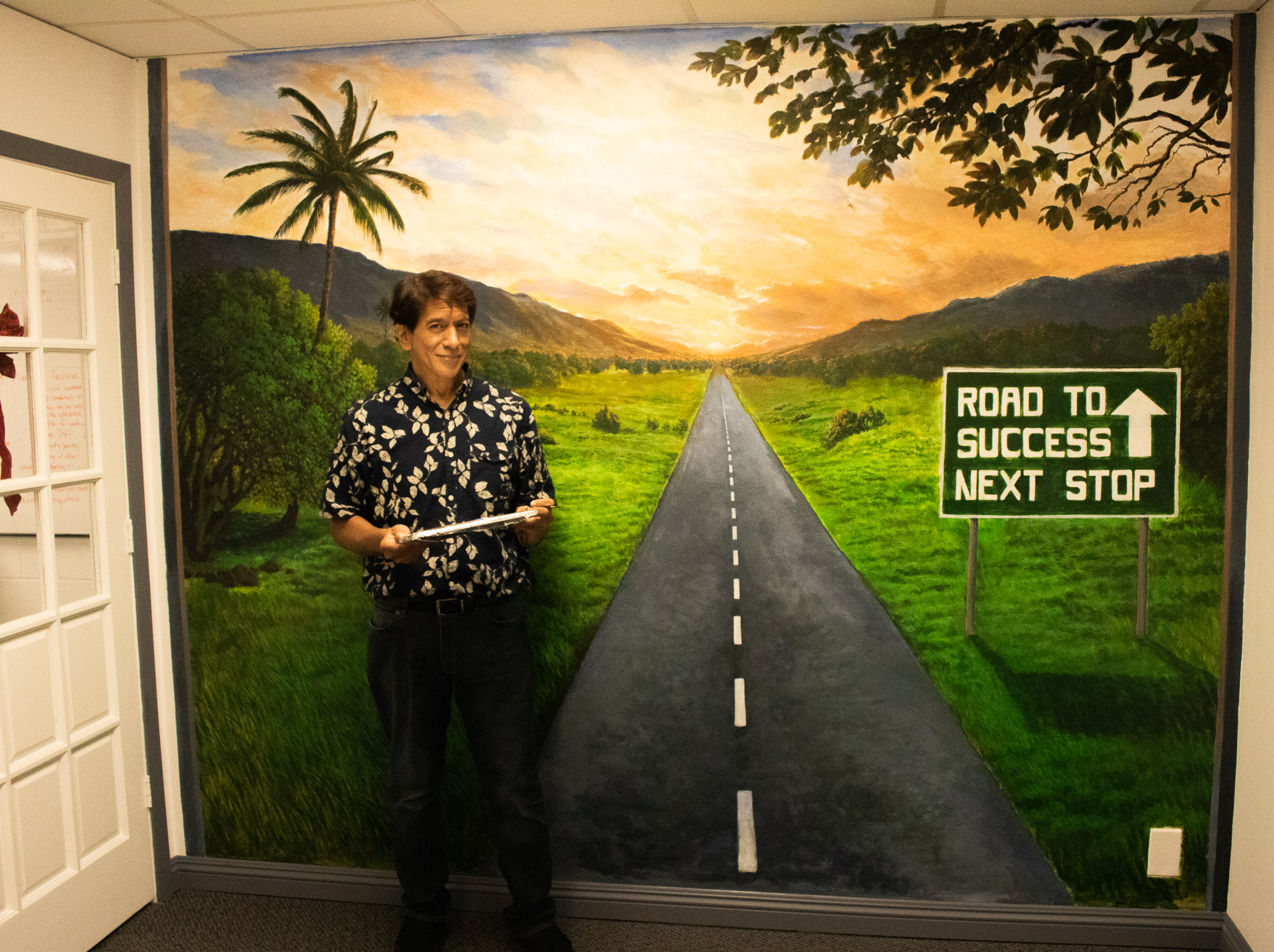 21 Jan Creating a Road to Success

When Joseph first showed up at Hale Mauliola (HMO), he was reserved and skeptical. All he knew about homelessness was the stereotypes. It didn’t take long for the HMO community to change his mind.

In 2020, Joseph connected with a social worker who helped him transition into HMO. After moving in, Joseph would often paint outside his unit. Word quickly spread about his talent and that he was taking commissions. Guests requested portraits of loved ones they hadn’t seen in a while or who had passed. Sometimes they would ask for family portraits but didn’t have recent pictures of them together, so he’d piece together different images, as he calls it “old school Photoshop.”

As Joseph painted more, his sense of belonging to the HMO community grew stronger. He built strong neighborly connections to his peers and slowly, began to rewrite the narrative of homelessness in his mind. Not everyone who experiences homelessness has a mental health or drug problem. Anyone can face unfortunate circumstances and end up with unstable housing. After all, that’s what happened to him.

Before living at HMO, Joseph never imagined he would end up homeless. He entered the accounting sector in the 1980s, where he climbed from an accounting clerk to a senior accountant. In the beginning, his philosophy was “First, painting; second, job.” But as his career progressed, painting felt more like a chore, not a passion. In 2021, after speaking with his therapist, Joseph connected the dots that when he stopped painting, other problems began to arise. He realized that “artwork, rather than having all the thoughts in my head, brings it out in an acceptable way.” By not painting, his thoughts and emotions didn’t have space to process and all of his stress internalized to an unhealthy level.

Mural of the Story

During the summer of 2021, Jeri with the Hele2Work (H2W) Program suggested that Joseph paint a mural in the skills lab. At first, Joseph put it off. A mural was a large request. He was busy doing other commissions and interviewing for jobs. Last fall, he received a conditional job offer at a fast-paced, high-stress office. However, after careful consideration he declined the offer. Joseph opted to continue his employment search in hopes of securing a role at a slower-paced company. It was then he also decided to take up Jeri’s proposal.

Buying paints during a Black Friday sale, he began the mural the week after Thanksgiving. During the morning, Joseph would attend the Taking Root Urban Agriculture class at the rooftop garden. He’d then go next door to the Housing & Employment office to work on the mural.

Joseph began painting in sections; his painting is layered, textured over an unlevel wall. His hope for his paintings is that they provide people a chance to “smell the roses” by making his paintings a moment to enjoy nature.

His original draft was 9×12 in; a quick 30-minute painting. When sketching his artwork on the 10×10 ft wall, Joseph discovered some extra space below the words Road to Success on the highway sign. He looked around the H2W office for ideas and was inspired by hanging motivational posters.

Rather than saying Next Exit like real signs, he wanted the mural to emphasize that it is normal to have unplanned stops along every journey. A detour or delay does not mean your story has to end there. A stop is just that, a stop before continuing on the journey to reach success.

Painting the mural was an unexpected boost of confidence for Joseph, who previously saw painting as a lost passion. After working on the mural for the past three months, Joseph is excited about potential art projects and wants to use his talents to help share the reality of homelessness. Of course, getting a steady job is still high on Joseph’s list of priorities. This time around, Joseph is determined to make time in his schedule time to paint.