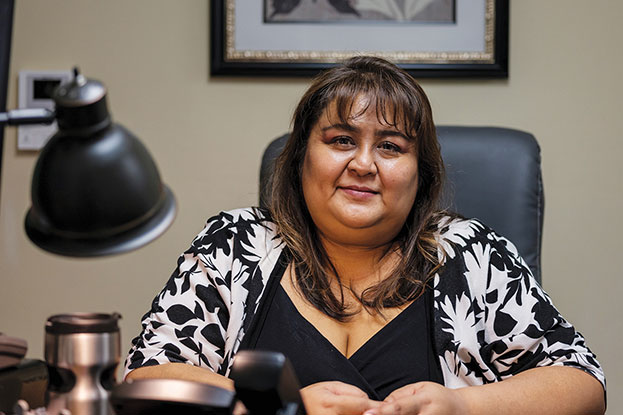 “Life’s most persistent and urgent question is, ‘What are you doing for others?” – Dr. Martin Luther King Jr.

Philanthropy, defined: Goodwill to fellow members of the human race, active efforts to promote human welfare. An act or gift done or made for humanitarian purposes.

This year has reminded us how many people do good works to help those in our communities, where COVID-19 has laid bare personal and economic insecurities. Philanthropy is about the people, organizations, donors and foundations putting countless hours into the work of making Hawai‘i a better place.  Here is one of the four profiles of those doing good work.

Especially during these times, answering King’s urgent question seems more important than ever.

When the pandemic hit, Minda Golez knew what was coming. She’d lived through it before, when Aloha Airlines ceased operations and the national economy collapsed in 2008. But this time, it’s worse, with no end in sight.

“I knew in early March that the calls would start flooding in,” Golez says about the pandemic. “It happened in 2008, people suddenly out of work and no idea what to do next.” Now, more than six months after the initial COVID-19 lockdown, the calls keep coming and panic has set in. “In the beginning, people thought life would get back to normal,” she says. “Now they know that’s not true.” Jobs are gone, businesses are shuttered, and they are in crisis.

Prior to COVID, Golez and her team fielded eight to 10 calls a week. Now they’re handling at least that many every day, and their call lists keep growing.

For 14 years, Golez has been the beating heart of the The Institute for Human Services Housing and Employment Program, building a team of housing specialists, employment specialists, case workers and program coordinators who spend their days working one-on-one with clients trying to get back on their feet. They’re known for their work with the houseless community, but with COVID-19, people who’ve never experienced home and economic insecurity are scared. Golez knows that, and she knows what to do.

“Furloughs are turning into layoffs now,” she says. “It’s not going to be the same again, and we know that. Take a couple who’ve both worked for Hawaiian Airlines their entire lives. They’ve lived a comfortable life, and now they don’t know what to do. They’re panicked.”

Golez and her team are having hard conversations with their clients—talking them through various options, opportunities and resources. Many of those clients, though, aren’t fully prepared to face the severity of their situations, Golez says. For them, it’s an evolutionary process. “In the early days, people would say, ‘I’ll get my assistance and unemployment, and there’s an eviction moratorium, so I’ll be OK,’” she says. “Now they’re getting the bills from the landlords, detailing the back rent due; the extra $600 per week in unemployment has ended; and the moratorium expires at the end of the year.” Now they’re digging out, facing thousands in unpaid rent and utilities, a likely eviction notice once the moratorium expires, and nowhere to go.

For Golez and her team, the hard talks get real quickly. The questions are tough: “Do you have a landline and a mobile phone? Do you really need that landline? Cancel it. What about cable, all those premium channels, and the DVR box — do you need those? Maybe just keep Wi-Fi. You’ve got a Mercedes? Maybe you should trade that for a less expensive car, a less expensive monthly payment.” And on it goes, detailing each aspect of a client’s situation and how they can make adjustments.

“We talk them through the process to really buckle down,” she says. “They have to be in it for the long haul, not just a wing and a prayer.”