Stories make up our lives, for Gerardo this one is the sweetest

Home > Blog  > Stories make up our lives, for Gerardo this one is the sweetest 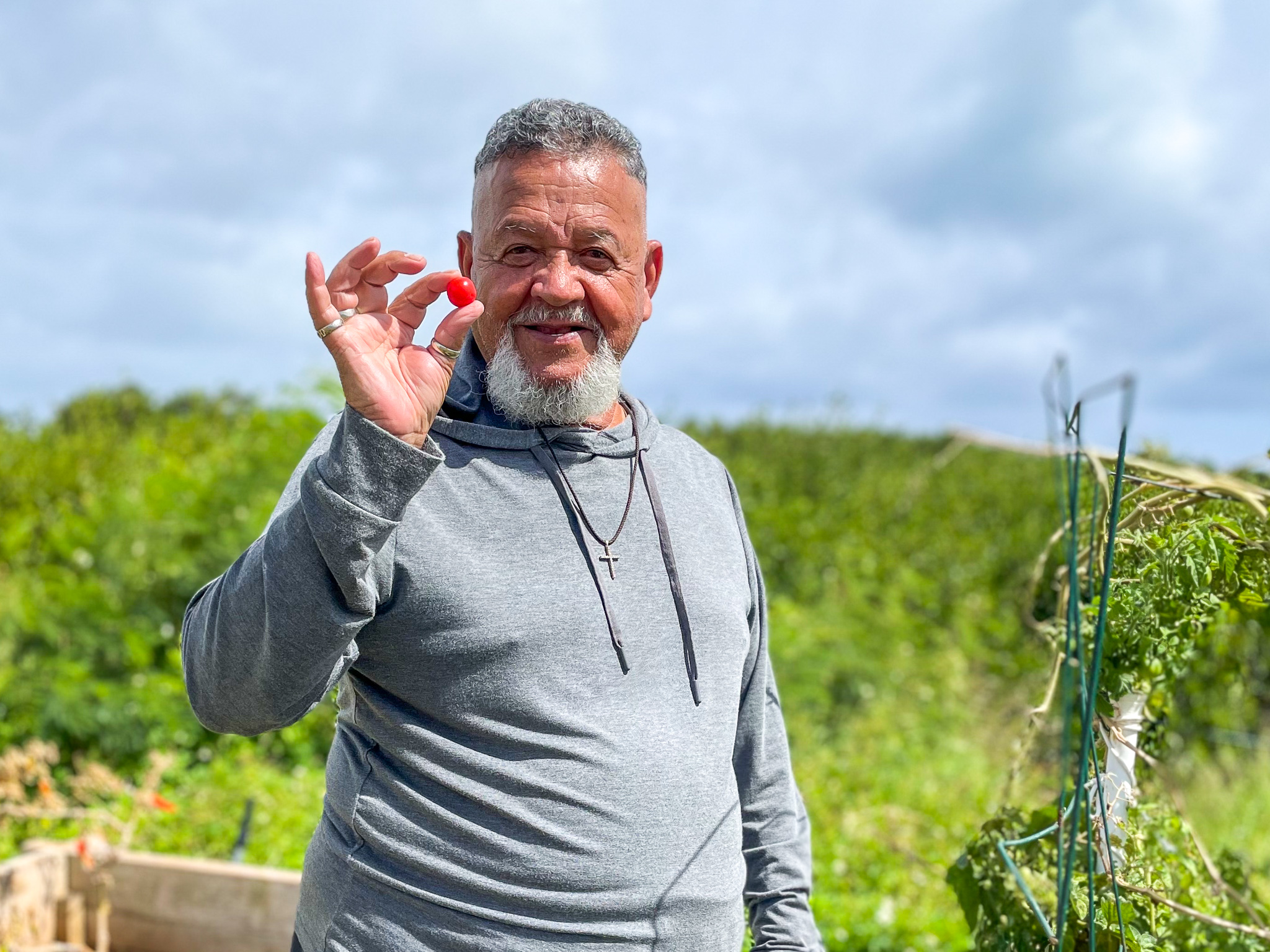 26 May Stories make up our lives, for Gerardo this one is the sweetest

The keiki at Kahauiki Village call him “Grandpa” and give him fist bumps when he walks by. Each one brings a smile to his face. When he’s not tending to the gardens in the village, he spends time with the children, teaching them multiple languages – Spanish, French, German – and impressing upon them the importance of education.

He knows first-hand just how valuable an education can be. He dropped out of school at age 12 to start working so he could feed his family. At the end of each 14 hour day, he brought home $4 to help feed his mother and three siblings. The memories of that life are still so vivid and painful that, even now, at 76, retelling the story brings tears to his eyes.

Gerardo knew he could never make enough money to support his family in their home country of Columbia and started planning to move to the United States. He learned English through correspondence courses at a school in Los Angeles, understanding that basic English skills would be critical when he arrived in the U.S. When he left Columbia at 18, he expected the journey to be precarious, but it was a risk he was willing to take. Of his plan to swim the last two miles, he said, “I didn’t care if I died along the way. It was worth trying.”

Life in the U.S. was never easy. Gerardo moved from job to job, and city and city. From Pennsylvania to New York to Miami, then Alaska before settling in Hawaii, he worked odd jobs and lived in shared houses, often sleeping 4 or 5 people in a room. Despite his challenges, Gerardo always sent money home to his mother in Columbia. He adored her and wanted only the best for her. “She was my Queen,” he said. “She was the only woman who ever mattered to me.” He wanted desperately to visit her over the years but without documentation, he knew that going home would likely mean never coming back. Instead, he called when he could and sent her all the money he could spare.

In 1986, Ronald Regan granted amnesty to undocumented immigrants who had come to the U.S. before 1982. Gerardo was among the nearly three million people who stepped forward in order to receive that amnesty and was accepted because he had never gotten in trouble with the law and always paid his taxes. With his new status, Gerardo was able to return home just in time to see his mother before she passed away.

Gerardo had just a few personal items and $4,000 on him when he arrived in Hawaii, including his photo of his mother and him in the hospital room during his last visit to Columbia. He thought it would be enough to get him started on a new life, but underestimated the challenges and cost of living here in the islands. He went through his savings quickly paying $40/night at a hostel and applying for job after job with no luck. Soon, he found himself on the streets in Waikiki, barely sleeping for fear of his possessions being stolen. Sometimes he could catch a nap on a city bus but often he got in trouble when they realized he had no destination. His arthritis made it hard to walk so mostly he sat and watched the world go by.

Desperate, Gerardo did something he never much liked to do – he reached out for help. He found his way to Waikiki Health where they had an available bed. He spent nearly a year there rebuilding his life before he was connected to Kahauiki Village and became one of the first kupuna to move into the village.

Living at Kahauiki Village is a blessing Gerardo still cannot quite believe. He loves his community and has taken on the responsibility of tending to the community gardens. He has big visions about what they can become. He wants to see the residents grow and eat their own food so they can eat healthfully and inexpensively. He wants to see the children thrive and explore the world beyond the village. He says, “this is home now.”