Our founder would have been 100 today 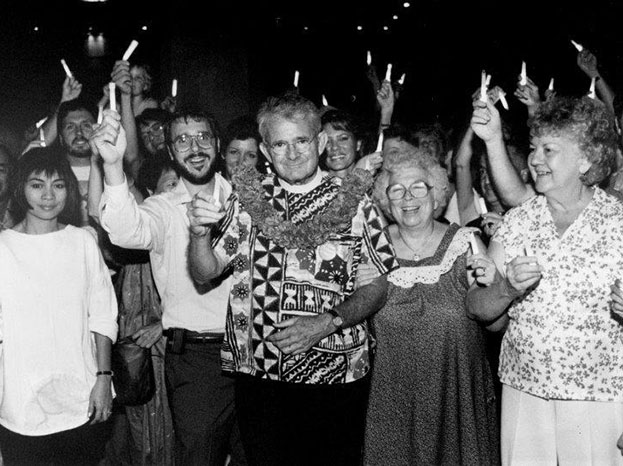 12 Jul Our founder would have been 100 today

July 1, 2020 – On this day in history, former Governor Linda Lingle declared today as Claude DuTeil Day. Today would have been our founder’s 100th birthday. I recently came across his 1997 obituary as reported in the Honolulu Star-Bulletin and reconnected with his poignant story of leadership and vulnerability.

The history of IHS, The Institute for Human Services is the foundation from which we carve our path to the future. No figure defines the heart and vision of our organization more than our founder Reverend DuTeil.

Here’s what the news had to say about him upon his death in 1997:

“The Rev. Claude Francis DuTeil, patron saint of Honolulu’s street people, rose above a lifetime plague of mental depression and a mid-1970s battle with alcoholism to help others.


The Episcopal priest who founded the Institute for Human Services died yesterday in a Texas nursing home from complications due to Parkinson’s disease, IHS Executive Director Lynn C.Z. Maunakea said. DuTeil and his wife moved to Argyle, Texas, in 1993.

DuTeil, 76, was complex, controversial, charismatic, brilliant, liberal and, above all, plain-spoken and practical.

“I have a pedigree for the work that I earned the hard way,” DuTeil said in a Star-Bulletin interview. “I know how it feels to be on the yonder side of the diagnosis.

“Life is like a phoenix bird that rises out of the ashes. And, forgive me, but that is what Christ is all about: good news based on the failure of all human effort.”

DuTeil founded the organization for the homeless in 1978. He chose the name because its initials, IHS, were short for Greek letters iota, eta and sigma, used to designate Christ.

“Jesus was one of the street people,” he said.

DuTeil was born in Wichita, Kansas. His mother, who had a history of depression, told DuTeil that the best cure for that was to get busy helping someone else. He said a guidepost for his own social concerns was her advice: “Claude, always remember to get the worm’s point of view before stepping on the worm.”

DuTeil served 3-1/2 years in the Army and was a chaplain in Europe.

He was graduated from the Georgia Institute of Technology in 1943 and Virginia Theological Seminary in 1949. He was ordained a deacon in June 1949 and a priest that December.

Originally DuTeil planned to work in the Far East, combining his engineering skills and his training as a minister. There were no openings, so he came to Hawaii.

With him came his wife, Roberta – his “Bert,” a former World War II WAVE in communications, whom he met at a college young people’s convention.

He served as vicar at St. Stephen’s Church-in-the-Fields in Wahiawa; as rector for the Good Shepherd Church in Wailuku and as archdeacon of Maui; as rector at St. Christopher’s Church, Kailua, and as vicar of the Episcopal Chapel in the Reef Hotel in Waikiki.

His flocks were seldom bored. As far back as 1958, DuTeil was calling public schools in Hawaii inadequate. And he urged couples to consult with a member of the clergy before getting married instead of waiting until the marriage ran into trouble. 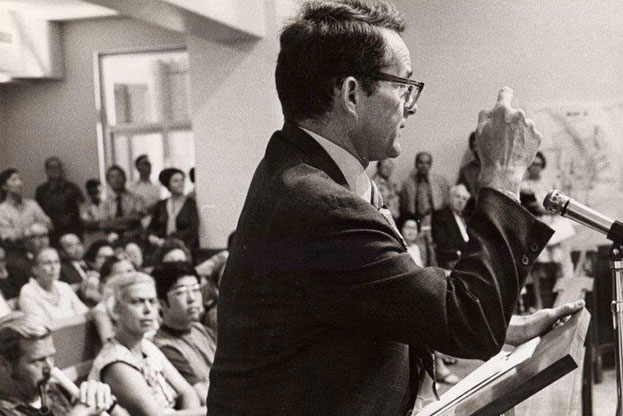 He was a strong supporter of a law to treat alcoholics as sick people rather than criminals, and to expand Hawaii’s treatment program. He was co-chairman of the Committee for the Humane Management of the Marijuana Problem, which he said was a medical, not legal, problem.

As a member of the National Council on Crime and Delinquency, he spent a night in prison. He organized Huckleberry Homes Runaway Emergency Services and the Media Council.

On the Sunday in 1969 when America’s astronauts made the first moon landing, he had people bring televisions to church, and he cut short the morning service.

He thought the church proper was an underutilized, high-priced structure and shocked some people when he showed first-run movies in the sanctuary in 1974.

Much to the chagrin of some parish members, he opened a house on the church grounds to a large vagabond O’Leary clan, which had lost a pitched battle with the law to try to keep their leaking sampan.

DuTeil’s problem with alcohol was escalating, however.

In 1978, after several years of “furloughs” at the insistence of his congregation at St. Christopher’s, the bishop ordered him to give up the pulpit where he had served 15 years.

For a time, DuTeil was seen as a tragic figure.

That same year, though, sobered and with the financial help and blessing of the Episcopal Church, DuTeil founded IHS in a shack on Smith Street with a jar of peanut butter, a loaf of bread and some instant coffee.

“You can’t pray on an empty stomach,” DuTeil said.

“I’m not here to subsidize laziness or foolishness,” DuTeil said in a 1983 interview. “If a person really wants to try, however, I’ll bend over backwards to help him get his life back in order.”

As Oahu’s only emergency shelter, the private agency provides more than 600 meals daily and bed space for 230 homeless adults and children.

“He was a visionary in his concept of providing support for a group of people dealing with alcoholism or suffering from mental illness who were abandoned by society,” former IHS Executive Director Debbie Morikawa said. “And he practiced what he preached.”

This summation of his life’s work is just a brief but beautiful nod to the colorful contributions and complexity of his work. What I love is that it captures the vision and fortitude that he brought to IHS’ advocacy. In this photo, he leads a vigil for mental health awareness and that’s an issue that is still critical to the work that we perform today.

We hope that you will continue to honor his memory, engage in our work and fight for those who are debilitated. These misfortunes often include financial hardship, addiction, mental health or any myriad of circumstances and choices that lead to a life on the streets.

PS – This article was published by Honolulu Star-Bulletin on January 23, 1997. You can read the original article here.