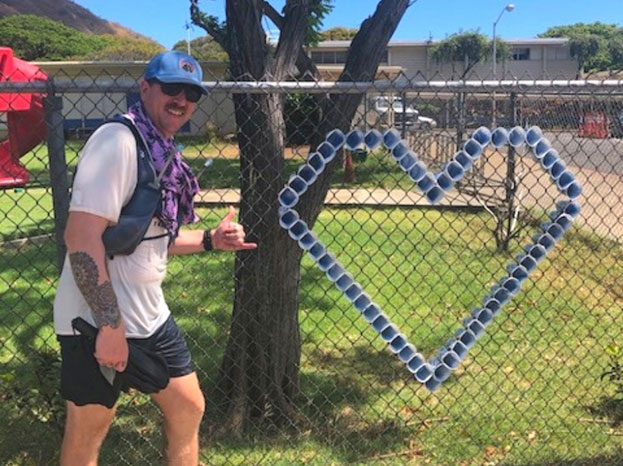 June 2020 – When the clock struck midnight on June 3rd, Mark Walter started running. He left his Ewa Beach home in the dark of night and didn’t stop until he reached Diamond Head, baked in the mid-day sun, 14 hours later. He covered 50 miles of ground, running largely alone, through the night and into the next afternoon.

June 3rd was Global Running Day, a worldwide celebration of the sport of running. It was also Naval Chief Mark Walter’s birthday; a day that he dedicated to running to help those in need served by IHS, The Institute for Human Services.

As an active submariner in the US Navy, Senior Chief Walter spends a lot of time in cramped spaces under water. So it’s no surprise that when on land, he craves wide open spaces and savors the freedom of stretching his legs.

It was in 2010 after his first tour of duty when he started long-distance running. “I needed something to do,” Mark said. “So I signed up for a 50K.” He ran that 50K race (31 miles) before he ran his first marathon in Honolulu later that same year. From there, he was hooked.

With much time spent this year on land and “in place,” Mark had plenty of time to reflect during his running. He felt fortunate to be healthy and financially stable when he knew so many others were not. “I’ve not been affected by this crisis,” Mark said, “but I know so many people have, and I want to be able to help.”  So for his birthday this year, Mark decided to run one mile for every year of his life. While 42 seemed like kind of an odd number, he decided instead to make it a round 50. In lieu of gifts for his birthday, he asked his friends to give to IHS in support of his run.

Mark’s wife Vanessa works at IHS in the Urban Agriculture Training program. She works closely with homeless individuals who are looking to get back on their feet by engaging in this job skills program. Vanessa is Mark’s biggest cheerleader, and was there at strategic stops along his route to offer water, food, and essentials like Vaseline for his blistered and bleeding toes.

Asked about how the race went, Mark said, “I’ve never had a more gratifying or fulfilling run.  It was extremely hard, but with the support of my wife, friends and the ladies from IHS who came out to cheer me on, I was able to get this done. I couldn’t have done it without them!”

Mark raised more than $2,100 for IHS. We are so grateful for his support and amazed by this incredible feat.

We are so grateful to friends like Mark and so many of you for all of the creative and varied ways that you support our mission.