Home > In The News  > Serving our veterans

March 2020 – When we fail our veterans, we fail the best among us. They served their country honorably and then returned home, as Rick did, to rebuild a life in the community.

He’d served in Vietnam and then settled in Hawaii with his wife. Their marriage crumbled under the weight of unhealed wounds, memories of war, and depression, leaving Rick alone and living paycheck to paycheck. When that partnership no longer worked, he gave up his home and set up camp under a bridge near Nimitz Highway where he stayed for fifteen years. Failing health frightened him enough that he struggled out from under the bridge, limping in pain to the Institute for Human Services to ask for help.

As coordinator for the The Institute for Human Services (IHS) Veterans Service Program, Keith Billingsley works with people like Rick every day, gathering the pieces of that person’s life to reassemble.  “Our primary goal is always housing,” Billingsley says. “But housing isn’t the hard part— sustaining housing is.”

He starts by identifying the VA benefits that are available to the veteran and then works to get documents like a birth certificate, social security card, and a state ID. “Then we tackle personal goals like employment, substance abuse issues, religious or spiritual counseling,” he says, “and we start piecing together the puzzle.”

V.E.T. House in Kalihi Valley is the safe-harbor where those pieces come together again. Veterans Engaged in Transition (V.E.T.) offers shelter in an eight-bed private community group home where healing and recovery happens: where life skills are rebuilt, and where life can begin again. In partnership with the Veterans Administration, IHS staff like Billingsley work with each resident, directing them to veteran-focused social services and counseling, and working with them to address each of their personal needs and goals. 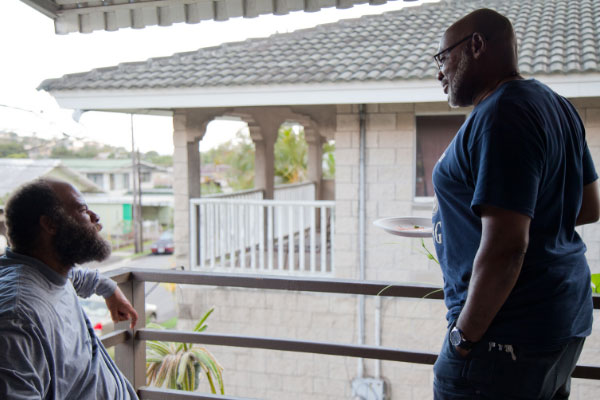 “Rick took everything we offered him,” Billingsley says. “Every appointment we sent him to, every veterans services opportunity, every outside organization, everything. He just did it.” Today, Rick is healthy again and living a sustainable life in a studio apartment in Honolulu.

Billingsley is passionate about the work because, as a veteran himself, he learned the hard way how difficult it can be to navigate the systems. “I showed up at IHS to make sandwiches,” he says of his start with the program. Today he’s helping other veterans navigate a system he now knows well.

It’s hard work, but Billingsley and his team are often reminded that they’ve made a real difference. Just recently, Billingsley received a note from the son of a veteran he’d once helped. “I know it’s been a while since you’ve heard from my dad, but I know he was most grateful for you and IHS for helping pull him from the streets and getting his life back. You were the turning point.” Because of Billingsley and his team, that veteran was reunited with his family and a life filled with love before passing away due to age and declining health.

Billingsley is still looking to do more. “Women veterans have the fewest services available to them; and IHS is seeing more of them. At some point, I want to build a program that focuses on their needs,” he says.

This article was originally published in March 2020 by Hawaii Gives Back, an initiative of Hawaii magazine.