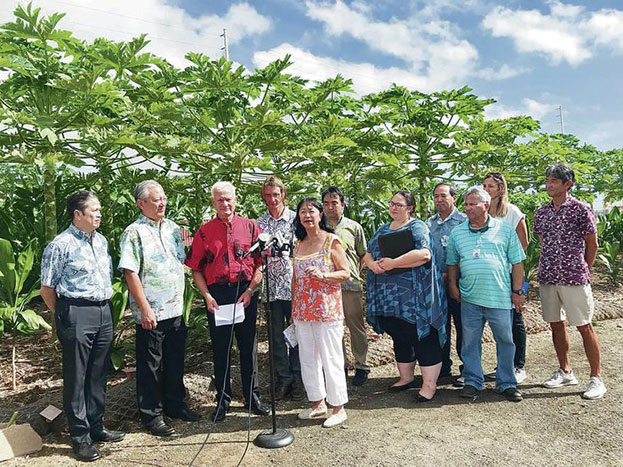 This story by reporter Nina Wu ran in The Honolulu Star-Advertiser in November 2019. You can read it here too.

December 2019 – A new garden at the Hale Mauliola navigation center at Sand Island represents hope for the homeless, and an innovative approach to solving homelessness.

The 5,000-square-foot garden, which is irrigated by gray water thanks to a new wastewater system, is home to papaya trees, ornamental banana trees, ti leaf plants, song of India, heliconia and ginger.

It was created with the help of the private sector, according to Honolulu Mayor Kirk Caldwell, but will be tended to by the residents of Hale Mauliola, a transitional housing facility made up of used shipping containers that the city opened in November 2015.

Caldwell unveiled the garden at a news conference Tuesday afternoon and provided updates on the center’s progress.

“A lot of people questioned whether this navigation center would work, and there was a lot of doubt,” said Caldwell. “It’s the first one in the state and unique, I think, in all of the United States … and it’s been extremely successful.”

Of the 1,042 served by Hale Mauliola since its opening, Caldwell said, about 60% came directly from the streets. Another 42% were women and 8% were veterans.

Out of the total, 301 from the center were able to move on to permanent, supportive housing.

The center, which is run in partnership with the Institute for Human Serv­ices, is different from other shelters because it allows couples and pets to live together. It is home to just under 100 individuals, according to Executive Director Connie Mitchell.

“I think it represents life, for me,” said Mitchell of the garden. “We’re going to be adding more plants with not only the idea that these are nurturing the people that are here, but restoring dignity in a different way because they’ll be engaging in an activity that actually is very productive.”

In Iwilei IHS has a thriving, aquaponic, rooftop garden that grows lettuce sold to local grocers and helps those working in it to gain confidence and earn some income.

At Sand Island the garden will provide residents the same learning opportunity as part of IHS’ “Taking Root” urban agricultural program, but will not be sold for direct consumption. The papayas may be used to make soap, and ornamentals or tis used for flower arrangements.

The residents are looking forward to their first harvest, she said.

The center’s wastewater treatment system, which was built for about $203,000, is self-contained and potentially can be used in areas that lack infrastructure.

The system allows gray water from the center’s shower facilities and sinks to be diverted toward the garden’s irrigation system, saving water and money.

The concept of water reuse is becoming more important due to the impacts of urbanization and climate change, she said.

In the past three months, IHS also has reached out to 327 homeless individuals on the streets, seeking to provide treatment to those suffering from mental illness or drug addiction as part of a new program under the state’s Assisted Community Treatment law.

So far, according to Mitchell, 25 individuals, representing more than 250 years of homelessness collectively, have been assessed for treatment. Five have petitions filed in court.