The road to redemption

Home > In The News  > The road to redemption 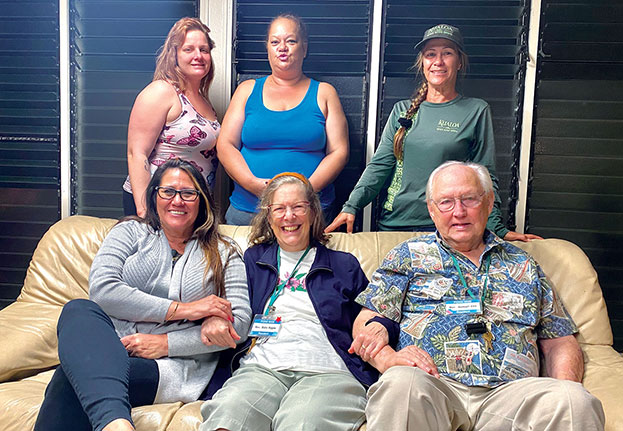 13 Jul The road to redemption

January 2020 – When Reverend Sam Cox, a Methodist minister, decided to turn his home into transitional housing for women released from prison, this gracious gift was driven by some alarming statistics. According to the women’s prison warden, once prisoners served their time, a future of freedom offered little chance for success.

Often, there is no homecoming for these women. Bridges burned with loved ones long ago can be difficult to mend. Plus, a no-socialization policy prohibited ex-cons from keeping friendships that were cultivated while incarcerated. After months or years behind bars, 85% ended up right back in prison. Many became homeless upon release.

This wasn’t the first time Reverend Cox found himself compelled to help people facing homelessness. In 1970, he founded Hale Kipa as an intervention for runaway teens who became prostitutes on Hotel Street. The experience he gained there gave girls a place where they could access the care and support they needed to make better life choices. This experience inspired him to believe that the model could work again.

More than 50 years later, as Sam and his new bride made plans to move into a retirement community, he decided to dedicate the home where he raised his children to be used to serve parolees. The residence for women was named Beacon of Hope by program manager Daphne, who has provided oversight of the residence since its inception eight years ago. Daphne was once sentenced to more than 40 years for drug trafficking. When she was released early, she committed to help others like herself. Daphne is a role model who leads with compassion and conviction. She is a firm believer in tough love. She makes the hard decisions of who stays and goes, holding firm to the values and purpose of Beacon of Hope.  She earned her bachelor’s and master’s degrees in social work and is a sought-after expert about crime and rehabilitation, frequently lecturing on how prisons can be places of healing. In addition to managing the house and counseling peers, Daphne is also currently employed helping children in protective services.

Beacon of Hope residents typically stay for months while they get back on their feet and find jobs. Current residents include two women who both grew up on Oahu’s North Shore. They affectionately call themselves “Beaconites” and have fought hard for their success.

Holly’s life included struggles with mental health and drugs that left her on the streets of the Bronx, with three young children. When she returned to Hawaii, she fell into the same destructive behaviors that led to prison for three years. During that time, she forged deep friendships, got clean and prepared herself to fight for a new beginning. Today, she loves her job in the kitchen at Kualoa Ranch. She has been reunited with her 13-year old daughter and is working towards having her own home someday.

Denise also resides in the house and works alongside Holly at the ranch kitchen. Since childhood, life has been a struggle. A runaway at the age of 12, she first became pregnant at 14 and had a total of 7 children. Denise served four years in prison. Thanks to Beacon of Hope, her life is back on track; she aspires to become a baker. She is also working towards reunification with her youngest daughter.

For these women, having the opportunity to reconnect with their children at Beacon of Hope has served as a motivator for their continued work and progress, so they were grateful for the opportunity to have children in the home. They recognize, however, that many women may not be ready for the restrictions of a family-friendly home in their initial months after leaving prison. In the future, the women hope a second home solely for reuniting families might be established, so Beacon of Hope can focus on single women. For now, both women are excited about the possibility of more women sharing their house of hope and light. They want to lift others up, just as they have been lifted.

Beacon of Hope is truly a place of healing, which is one of the many reasons it is now part of the IHS family of programs. Helping people overcome their past challenges and end or avert homelessness is core to IHS’ mission. We believe everyone deserves a second chance and a safe place to make a fresh start, so when Reverend Sam approached IHS with the prospect of adding Beacon of Hope to our family of programs, it was a natural fit. IHS now has two transitional houses, Beacon of Hope for women, and House of Redemption for men, both of which are designed to help people rebuild their lives after incarceration.

You can be a part of mending lives through these programs. Your donations can help to support the work needed to provide a safe landing place upon release that offers hope, healing, and a way forward. Your gift can provide fresh linens and household supplies for guests upon arrival, as an expression of hope and care. They also help to lower operational costs and keep rent affordable for residents, so they can save for the day when they’ll move into their own homes again.

Click here to read more on page 11 in MidWeek Windward.