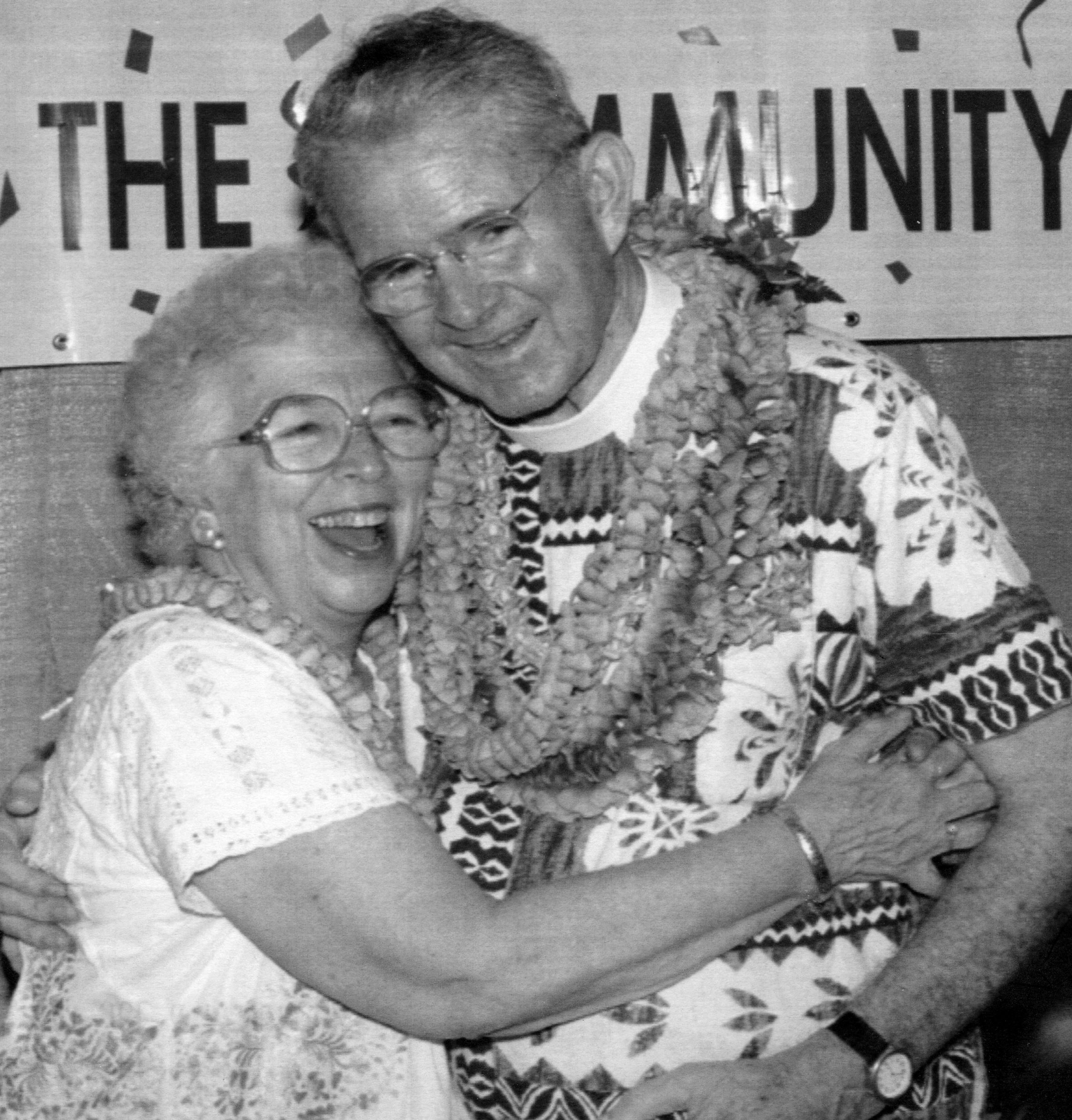 Roberta DuTeil, or as we know her best ‘Tutu Bert,’ turns 100 years young today, January 10th, 2022! An incredible milestone for an incredible person and family. Join us as we celebrate her virtually today and every day!

Even after relocating to the U.S. Mainland in 1993, Tutu Bert has continued to serve IHS as an Emeritus member on the Board of Directors. The entire DuTeil family has continued to be active supporters of our mission.

A young Roberta met the charismatic Claude DuTeil in 1941, while they attended a college young people’s convention: him from Kansas; her from Alabama. They married five years later at the end of World War II (WWII), during which she served in the U.S. Navy as part of the WAVES (Women Accepted for Volunteer Emergency Service) Reserves and specialized in Communications. The pair moved to Hawaii together in 1949.

Throughout their time in Hawaii, Tutu Bert and Fr. Claude were active in their communities and parishes. They cared for those who often didn’t get second glances and took in people who needed words of inspiration or a place to stay for the night.

Tutu Bert has always embodied warmth and care. She worked behind the scenes to support IHS and her husband’s mission. Though not officially named The Institute for Human Services until 1982, Tutu Bert and Fr. Claude began the “Peanut Butter Ministry” in 1978, feeding the homeless in Chinatown. She could be found in the kitchen making meals, taking care of guests, volunteers, and staff, doing whatever was needed to keep the mission running, and providing a safe space for those in need. Both Fr. Claude and Tutu Bert believed in second chances and tending to the mental, physical, and spiritual health of all who found their way to IHS.

After Fr. Claude was diagnosed with Parkinson’s Disease, Tutu Bert took on more responsibilities, including chauffeur and working even more in tandem with her best friend, Fr. Claude. Tutu Bert became famous for driving clients to doctor appointments and ensuring they followed up with their medical care.

Equally humble as she is faithful, Tutu Bert rarely lets the spotlight stay on her. In 1991, the IHS Board of Directors named her “The Wind Beneath Claude’s Wings” and awarded her a picture signed by Bette Midler, the singer of “Wind Beneath my Wings.”

In 2016, Tutu Bert received the Congressional Veteran Commendation for her service in the U.S. Navy during WWII. The very same year, IHS opened its first Tutu Bert’s medical respite home in her honor. Much like the beginning days of IHS and it’s rapid expansion, in 2021, the fifth Tutu Bert’s House was established, this one dedicated to caring for Hawaii’s houseless kupuna (elderly).

The IHS ohana sends our love to you, Tutu! You remain our inspiration and amazing model of compassion. Happy 100th birthday!